The synonyms of Grace: Agility. Beauty. Elegance. Decency. Decorum.
For a passionate swimmer, this word evokes the act of swimming itself. Swimming Matters digs deeper into the nuances of this inspiring word, and explores its importance, its practice, its practitioners and how it can be developed and strengthened with Pradeep Divgikar, a die-hard aquatics enthusiast, passionate administrator and former water polo stalwart. 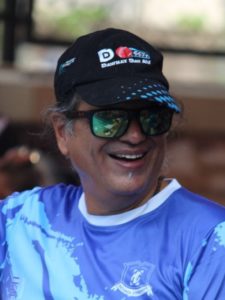 What does grace mean to you?
Grace in its most simple form and understanding to me would mean any action that would exemplify any one or combination of these virtues: elegance, composure, equanimity, courtesy, dignity.
How can swimmers practice grace?
The virtues of grace and being gracious both in victory and defeat must be instilled in young swimmers from the time they enter the world of competitive swimming. The virtues of grace and the importance of practising it should be drilled into the swimmer by Coaches, Parents, Guardians and Support Staff. It must become a part of the Culture of every Swim Team.
How can parents teach grace?
Parents are a vital cog in the swimmer’s wheels of progress. They are important stake holders in the swimmer’s life. Their influence and support have a tremendous bearing on a swimmer’s mental make up. Swimmers look up to their parents as role models and tend to ape them. Thus, parents need to be very mindful of this fact and not bad mouth or demonise their child’s competitors. On the contrary, they should enlighten their child to be gracious both in victory and defeat. Parents must steer clear of bitterness (in defeat) or arrogance (in victory) and make sure that their child inculcates the virtues of graciousness at all times. It is okay to be euphoric without directing any hate towards any competitor. At the same time, it is imperative to accept defeat with grace. Parents should teach the child that while being disappointed at not being able to perform your best is okay for a fleeting moment, this disappointment must not turn into bitterness and hatred for the victor. Accepting defeat with Grace is something that all parents must teach their children. Practising Grace can calm the swimmers nerves and dispel negativity which is counter productive.
How can grace affect one’s performance in the pool?
Grace can only have a positive effect on the performance of any sportsperson, including in the pool. Not for a moment should grace be misconstrued as timidity or a weakness. On the contrary, it must be viewed as a strength in a swimmer’s armour. Grace should be a constant even if success and failure can (and will) be variables. One’s behaviour and disposition should not be governed by the results in the pool. While joy, happiness, euphoria, sadness, disappointment are all very human and spontaneous emotions, Grace must be the cornerstone of every such emotion. Grace will help Swimmers perform to their best potential as it is shorn off any negativity and exudes only positivity. A clear mind is very important for any swimmer to excel in a race.
What are the advantages of having grace in one’s life?
The advantages are multiple. You will always bear an amiable disposition bereft of any negativity. It will show in your appearance. You will be much loved and respected by your peers and juniors for whom you could become a great role model worthy of emulation. It will help you approach your races with a clear mind and focus.
Can you share some examples of grace in Swimming?
One of the finest examples of Grace was demonstrated by three Champion Swimmers viz. Phelps, Le Clos and Cseh when they were beaten to joint second place in the 100 Fly at the 2016 Rio Olympics by young Singaporean Joseph Schooling. The warmth, affection and respect that the three legendary champions showed while congratulating Schooling for the huge upset that he had created by beating them was a reflection of Grace in action. The whole world was a witness to this act of graciousness displayed by Phelps, Le Clos and Cseh. 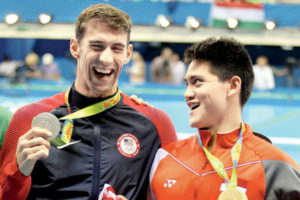 Closer home I have seen a lot of our top swimmers like Richa Mishra, Kenisha Gupta, Apeksha Fernandes, Virdhawal Khade, Srihari Nataraj to name a few have been consistently gracious in their demeanour.
In conclusion, I am reminded of two very meaningful lines from Rudyard Kipling’s famous poem ‘IF’ that define Grace in action:
‘If you can meet triumph and disaster and treat those two impostors just the same’
Competitive SwimmingGraceParentsSwimming
Previous PostMother’s Day Special: Swim Mom. Teacher. Learner.Next PostWhat Kind of Swim Mom are you?